Awarding Economic Champion honors is a highlight of KEDA’s Annual Meetings and this year four community members were recognized, including a posthumous Lifetime Economic Champion award in honor of Rear Admiral Bruce A. Harlow JAGC, U.S. Navy (Ret.) who passed away last year. The award recognized Harlow’s service to country, and many contributions to Kitsap County, including his passion for engaging and encouraging a love of marine science in young people as manifested in his work and leadership with the reopening of the SEA Discovery Center in Poulsbo. A donation to Western Washington University’s SEA Discovery Center is being made in the Admiral’s honor.

Steve Politakis, CEO of Kitsap Bank and outgoing KEDA Board member and Past Chair was recognized for his leadership and service to the community. Port Orchard mayor, Rob Putaansuu, a former colleague of Politakis’ presented the award. Putaansuu spoke of their shared goal to redevelop downtown Port Orchard and noted that Politakis is one of Kitsap’s strongest champions of economic development. “During Steve’s term as Chair from 2014 -2015, he worked to grow private sector investment, and provided strong and stable leadership” noting that, “under his leadership KEDA won national awards.”

Kathy Cocus, KEDA Business Development Director, who will be retiring this coming October, after twenty-one years at KEDA, was recognized for her achievements and economic development work in Kitsap County. Susan Veach, KEDA accountant and owner of Accountability Plus, praised Cocus’ work saying, “There is no area of business or community that [Cocus has] not influenced or brought resources and hope to. Under your leadership KEDA’s PTAC  [government contracting assistance program has become one that] is envied across the state.”

Anna Reyes-Potts, General Manager, TMF CNC Machining, praised Cocus stating “Kathy lives and breathes economic development, she knows every business and has her finger on the pulse of Kitsap business.”

Greg George, Port Madison Enterprises Board President & KEDA Executive Board was recognized for his leadership on the KEDA Board.  In an interview with George, KEDA executive director, Joe Morrison recognized his influence and work with KEDA’s Diversity Equity and Inclusion Task Force and asked about his perspective.  In response, Mr. George commented that it has exposed and caused him to evaluate and correct his own individual prejudices. Saying, “I appreciate what DEI [Task Force] is doing and it feels good to be a part of that. Knowing that we’re getting our board and membership and involved – it’s a big step.”

KEDA Executive Director, Joe Morrison presented an ambitious plan for 2022 with a primary focus on business retention and recovery; continuing the work of KEDA’s Diversity, Equity, and Inclusion Task Force; implementing the WAV-C grant program and identifying new opportunities for entrepreneurship and innovation; and continuing to focus on defense and government contracting opportunities for Kitsap businesses, and creating organizational efficiencies and growing private sector revenue.

Documents, presentations, and video can be viewed on KEDA’s website at https://kitsapeda.me/AM2022

New KEDA Board Officers were elected as Chair Nathan Evans, Principal Software Architect for Microsoft,  passed the gavel to Erin Leedham, General Manager of Kitsap Mall. Lynette Ladenburg, CEO of Martha and Mary was elected to Vice Chair, and Roger Newton, owner of Newton Building & Development was elected to Treasurer. Nathan Evans assumed the role of Immediate Past Chair. 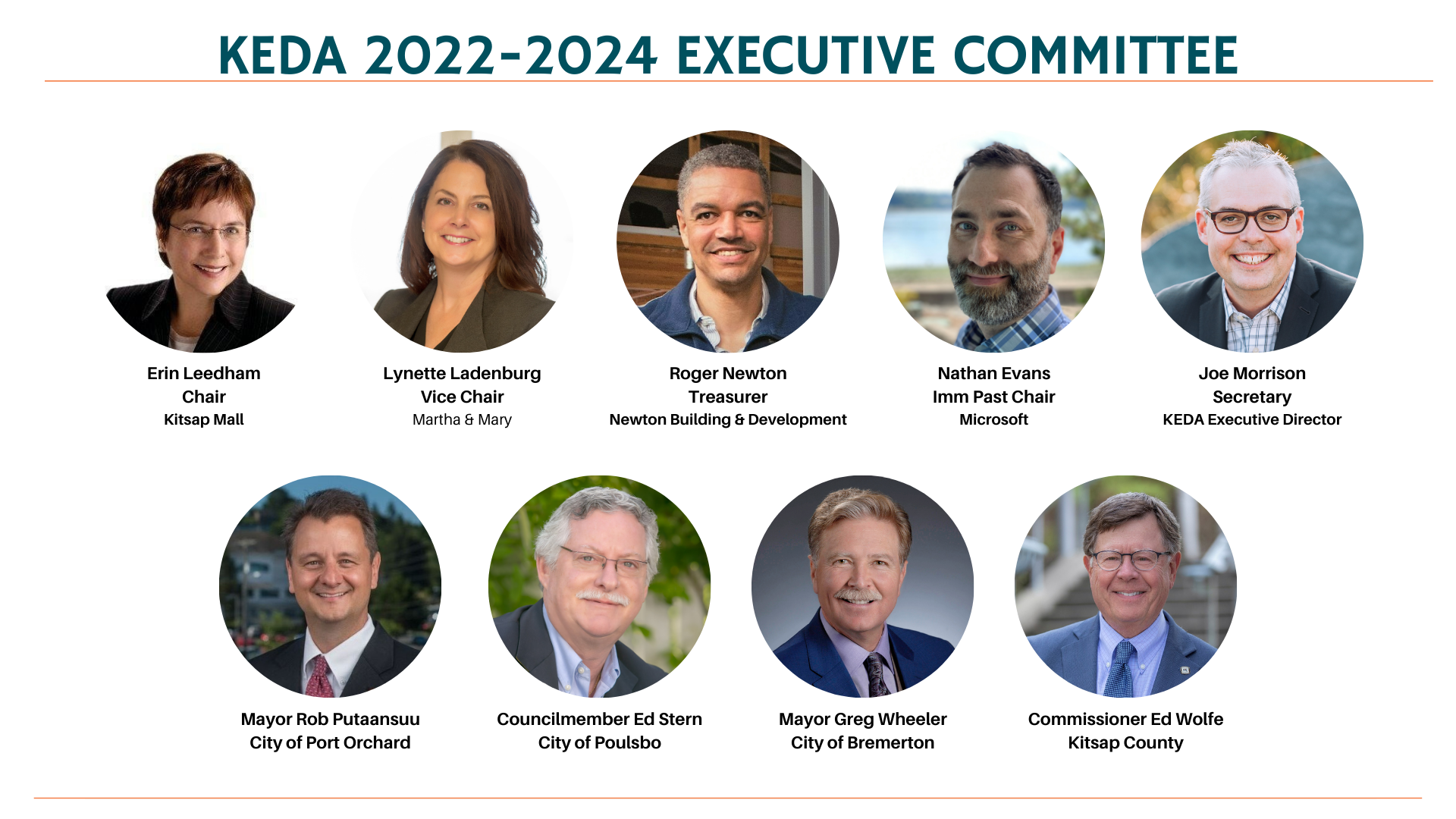 Mar 30 2022
In addition to being able to search current opportunities in Washington’s Electronic Business Solution (WEBS), all registered vendors will be able to search past opportunities starting March 31. All information, including documents available at the time of posting, will be visible. This request came from the Department of Enterprise Services’ (DES...Continue Reading

Mar 29 2022
Turn your passion into a livelihood!   Washington State Department of Commerce Startup Washington  just announced the launch the new Creatives Academy. The academy is a series of free, on-demand lessons that cover a wide swath of business skills,  designed to teach those in the creative sector how to turn their passion into a livelihood.  Twelv...Continue Reading